Sheep in the Big City Wiki
Register
Don't have an account?
Sign In
Advertisement
in: Characters, Male, Human,
and 7 more

General Specific is the main antagonist of the series. He is Sheep's arch-nemesis, Private Public's boss, and the leader of the Secret Military Organization (SMO).

General Specific possesses a portly figure and is the shortest amongst his men. He dons green general attire, hence the three yellow bands sprawled across the sleeves, and is decorated in various pins asserting his military rank. He has a long, bulbous nose accompanied by a set of yellow eyes and a chronically-clenched mouth. A single star compliments his abnormally tall hat.

General Specific is typically defined by his undying determination to capture Sheep. His determination manifests in various ways: mostly in that of over-the-top schemes and poorly-executed attacks. On occasion, he can seem overly prideful and incompetent, but numerous episodes have demonstrated his true intelligence.

General Specific gets a major appearance in almost every episode of Sheep in the Big City; with the notable exception of "Mistaken Identi-Sheep", "Beauty and the Bleats", "Belle of the Baaah", and "Wish You Were Shear!", where he makes only minor appearances. 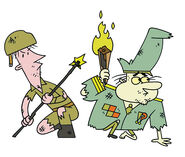